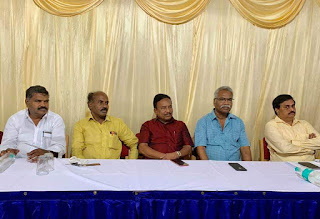 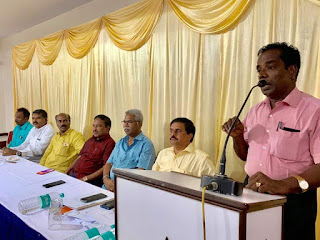 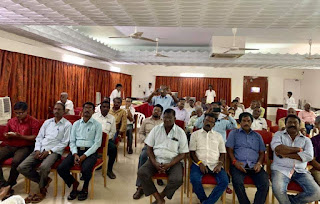 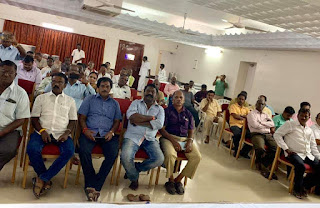 All union consultation meeting on Telecom Cooperative Society Elections:
On 19-05-19 a meeting of NFTE-BSNL, FNTO, TEPU and SEWA in both Chennai Telephones and Tamilnadu Circle was held in Chennai under the presidentship of Comrade CKM, Sr. Vice- President (CHQ) / NFTE- BSNL. It discussed about the forthcoming elections to the Telecom Cooperative Society and the stand to be taken in the tomorrow’s RGB meeting of Telecom Society . It was unanimously decided to continue the winning alliance of NFTE/ FNTO/ TEPU/ SEWA as in the last RGB election held in 2014 in the forthcoming Society elections also. The following Leaders spoke at the meeting.
Comrades
1. P. N.Perumal, National President/ SEWA
2.S. Lingamoorthy , National President/ FNTO
3.  Jayapalan            | FNTO / Tamilnadu
4. R. Vijayakumar.    | TEPU / Chennai Telephones
5. K.M. Elangoven | NFTE/ Chennai Telephones
6. P. Shanmugam.   | NFTE/ Tamilnadu
Besides RGB members from Chennai Telephones, Tamilnadu and Karnataka several Union leaders of alliance unions participated in this consultation meeting. Comrade S. Veeraraghavan , President of Tamilnadu Telecom Cooperative Society was invited to this meeting to brief all the unions about the current situation of Telecom Cooperative Society. Along with him all the Directors of the Board including Vice- President. K. Ragunathan and Treasurer Thirusangu attended this meeting.
The meeting condemned the negative attitude of BSNLEU in collaboration with few selfish/ Corrupt individuals in spreading baseless allegations and false information to damage the reputation of Telecom Cooperative Society just because it couldn’t win any one Director post out of 21 in the Board. The meeting unanimously decided to face the unwanted litigations thrust upon the Society with the sole aim of crippling the financial position of the Society. The meeting which began at 6 pm concluded at 10 pm after a fulfilling deliberations.
Posted by NFTE தென் சென்னை மாவட்ட சங்கம் at 23:02